Euan is researching a solution which will allow modern radars to operate in environments crowded with radio frequency energy, for improved reliability in applications like driverless cars or the detection of misused drones.

The increased use of radar technologies means the radio frequency (RF) spectrum is becoming particularly crowded. The increased use of cheaper, off-the-shelf components is needed to make radar affordable for wider use, but this means they are more vulnerable to interference than the types of technology used in the military. If the performance of a radar is downgraded due to interference, this could lead to disastrous consequences e.g. a driverless car could lose its ability to navigate properly. For radars to be commercially viable in mass markets, this problem must be overcome.

The aim of Euan’s research is to show that by employing advanced signal processing techniques, radars can maintain the operational capability necessary to operate in a crowded RF environment e.g. detecting a drone over a city before it is a threat to public safety. Euan aims to build on Leonardo’s deep knowledge of military-grade radars to develop the techniques for the commercial market, as well as exploring the necessary algorithms to make this possible.

Euan joined Leonardo’s graduate programme in 2016. The advanced radar research work he conducted within that programme formed the background to his PhD project, which is co-funded by Leonardo and started in September 2017.

Leonardo has decades of experience creating high-end military-grade radar equipment. Euan hopes to use this expertise to help him research uses for the technology in the commercial market. He also aims to conduct several experiments for his PhD and without Leonardo’s significant infrastructure and radar expertise, these experiments would not be possible. 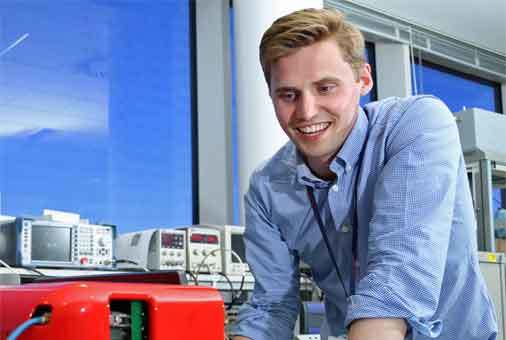