Alex is creating the first ever system that will enable autonomous boats to interact and communicate with humans using existing vehicle communications methods, such as radios.

In recent years, there has been a growing interest in developing automated marine transport. For companies operating offshore and scientific research organisations alike, autonomous vessels can reduce operational costs and the rate of accidents, and increase time at sea and efficiency.

To make autonomous vessels a reality, one of the main challenges is to prove they can be as safe as their manned counterparts, and establish a way for them to communicate with humans to navigate traffic and remain safe, particularly in busy shipping lanes.

Alex’s system will incorporate natural language processing techniques to enable autonomous boats to listen to marine VHF communications and intelligently react to human interactions. It will use existing shipping communications systems, mitigating the need for expensive upgrades and paving the way for an easier adoption on the world’s waterways.

Alex is currently working as a Marine Autonomy Scientist at UK-based ASV Global, a world leader in the construction and development of autonomous boats. He holds an MSc degree in Systems Engineering and Computer Science from the Federal University of Rio de Janeiro (COPPE/UFRJ), with an emphasis on Algorithms and Theoretical Computer Science.

Recently, he created an autopilot system to track underwater vehicles, which was part of the system used in the search for lost flight MH370, and also co-designed the new core data structure design for the company’s leading advanced autonomy system. 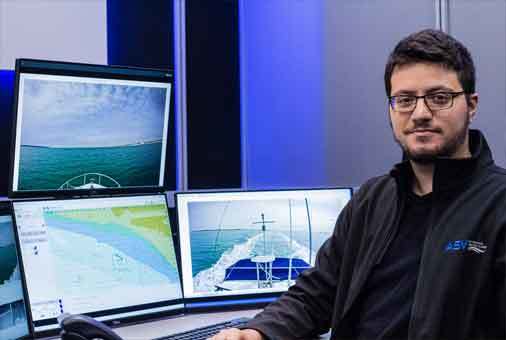